Eqsash
Sign in Registration
ArticlesDownloadServicesAudioVideoContacts
ruen
Home > Articles > Launching the site on your PC, which local server to choose - OpenServer, Denwer and others

Launching the site on your PC, which local server to choose - OpenServer, Denwer and others

The best way to develop a site is on your computer, but for this you need to first configure it as needed. Namely, you will need to install all the necessary components to run the code, run the database, etc. These components can be installed in a variety of ways. First, you need to determine which programming language will be used, which database will be required and other details. 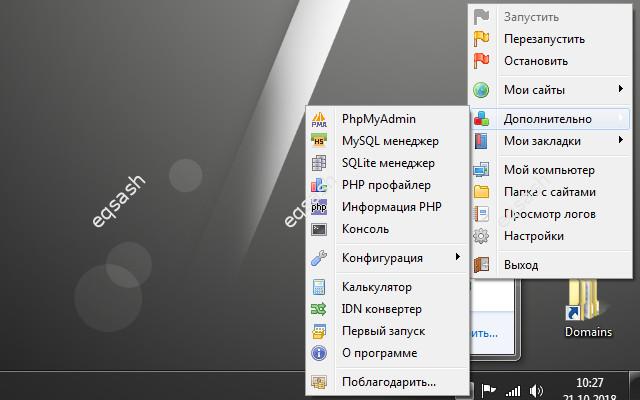 For example, it is not necessary to develop sites in PHP, there are also other web programming languages ​​and libraries . Among them ASP.NET from Microsoft with the ability to write in any language - be it C ++, C ##, etc. Python, Ruby on Rails, Java are also quite common. In short, the tools used may vary, but the most popular language for the web is PHP. With databases too, there are many options, but the most common is MySQL.

Accordingly, to execute the written code, you need to install the necessary software (software). Such software can be downloaded from the official sites of the tools discussed above, and then installed and configured on your PC. However, this approach will take time and can cause some difficulties. Therefore, there are special third-party programs that contain all the necessary components for deploying a local server. Often such programs are called local server. Local server is an environment for executing site code, similar to that used on conventional hosting.

Which local server to choose ? Denwer was very popular for quite a long time, but it is significantly outdated and is not updated yet. It included all the necessary components, many developers began to learn to develop from it. Over time, other similar kits began to appear, but they are no longer so convenient.

Among the many local servers such as XAMPP, AppServ, Zend Server, VertigoServ and others, local OpenServer is the most convenient for many today. This is a pretty good local server that allows:

Thus, launching the site on your PC is possible, only some components are required for this. These components together form a local server, which can be assembled either by yourself or downloaded ready-made.

← Where to host your website - which hosting to choose, paid or free
Popular web programming languages ​​- a complete list with a description of which is better →
Comments (0)
For commenting sign in or register.